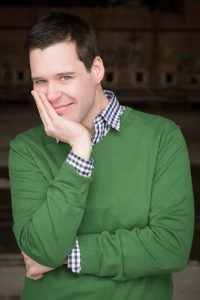 Praised for his "sweetly rendered, fluid and pliable tenor voice", Christopher Mayell is quickly making his mark as a rising star in Canada's opera houses and concerts halls.

Christopher maintains a hearty schedule of engagements across the country, including performances of Verdi's FALSTAFF with Calgary Opera and Pacific Opera Victoria, Offenbach's LA VIE PARISIENNE with Toronto Operetta Theatre, and Puccini's TURANDOT with Manitoba Opera.

Recent appearances include Bach's Cantata No. 55 'ICH ARMER MENSCH' with the Edmonton Symphony Orchestra, Bach's CHRISTMAS ORATORIO with the Kingston Symphony, Orff's CARMINA BURANA with the Toronto Mendelssohn Choir, and Mozart's REQUIEM with the Grammy-nominated Elora Festival Singers. He has also joined the Winnipeg Symphony Orchestra as well as Orchestra London for performances of Handel's glorious MESSIAH.

Christopher is enjoying a growing international presence, including a portrayal of the title role in a world-class production of ALBERT HERRING at the Aldeburgh Festival in England (alongside soprano Felicity Lott), as well as a nationwide tour of China.

A champion of new Canadian works, Christopher has been a key creator in ArrayMusic's production of HOW IT STORMS (an opera with Gamelan ensemble), FALLUJAH with City Opera Vancouver, THE LIVES OF LESSER THINGS with Opera NUOVA. He has worked closely with Toronto's Tapestry Opera in their development of new works, including GET STUFFED!, and OKSANA G. Recently, he collaborated with Toronto's Continuum New Music, performing a world-premier performance of 'FREDERICK'S DOCTOR', a narrative for tenor and instrumental ensemble.

Christopher is a proud alumnus of the Calgary Opera Emerging Artist Ensemble program. He is also the creator of the podcast, 'Overthought', in which he and fellow tenor Isaiah Bell discuss the aspects - both challenging and victorious - of a classical singer's life.