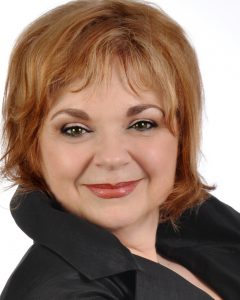 Montreal native Christiane Riel is recognized for the beauty of her voice, the generosity of her interpretations and her dramatic prowess as a singing actress. The most demanding roles of the soprano repertoire including the heroines of Puccini, Verdi, and those of the French romantic repertoire encompass the very heart of her career. After a triumphant debut as Antonia in THE TALES OF HOFFMANN with the Canadian Opera Company, and, particularly, when she stepped in at short notice to perform the role of Elisabeth in Verdi's Don Carlos at the COC, she began drawing the attention of the Canadian press. Since then, Ms Riel has enjoyed an international career with performances throughout Canada, United-States and Australia in such roles as The Countess in THE MARRIAGE OF FIGARO, Donna Elvira in DON GIOVANNI, Micaëla in CARMEN, Marguerite in FAUST, The Governess in THE TURN OF THE SCREW, Desdemona in OTELLO, Alice in FALSTAFF, Hanna Glawary in THE MERRY WIDOW, Rosalinda in DIE FLEDERMAUS, Mimì in LA BOHEME, Liù in TURANDOT, and Nedda in I PAGLIACCI to name but a few. She recently added to her repertoire the title roles in Puccini's TOSCA and MANON LESCAUT garnering warm applause and kudos for her poignant portrayals.

It is especially for her interpretation of the role of Cio-Cio-San in MADAMA BUTTERFLY that Ms. Riel has earned the widest acclaim. Described as "heartbreakingly believable" she has been chosen for this role in productions including those at the San Francisco Opera, New York City Opera, Canadian Opera Company, West Australia Opera, Minnesota Opera, Edmonton Opera, Calgary Opera, Manitoba Opera, Virginia Opera, Utah Opera, Pacific Opera Victoria, Nashville Opera, Saskatchewan Opera and in concert with Seiji Ozawa and the Boston Symphony Orchestra. Each performance has launched staggering ovations from the audience and rave reviews from the critics.

Since 1997, despite her professional engagements and desiring to transmit her extensive knowledge of the voice, Christiane has devoted significant time to vocal instruction in her own studio. Amongst her students are beginners as well as young professionals and university graduates seeking to perfect their art. Furthermore, she has given master classes at several Universities, Conservatories and opera companies' young artists programs. Summer programs such as Opera Nuova and Highlands Opera Studio have also requested her expertise as a member of their faculty. In September of 2009, Christiane enthusiastically joined the university teaching fraternity; firstly, at Wilfrid-Laurier University (2009-2010) and then at The University of Western Ontario (2010-2013). Also, she acted, on numerous occasions, as a jury member evaluating examinations, competitions, grants and bursaries and, as an advisor, participated in various forums discussing the future and viability of opera throughout Canada.

Christiane has successfully completed with excellence her Graduate Diploma in Management of Cultural Organizations from HEC University, Montreal. This additional perspective coupled with her extensive performing and teaching experience has given her a substantive comprehension and appreciation of the lyric arts.

Since July 2013, Christiane Riel is Assistant Professor of Voice at the University of Ottawa where she coordinates the Vocal Sector.