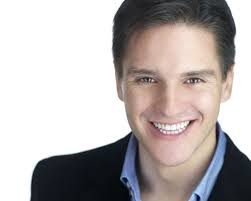 I was born in Calgary, Alberta, Canada, the third child of Otto and Yvonne Marguerite (née Wright) Gietz. I lived in the same house on 48th Avenue from the time I was born till I left to pursue my career. What can I say? The location agreed with me.

The first singing I can actually remember was a rousing rendition of ‘One More River to Cross’, the famous Sunday School song about the loading of Noah’s Ark. I sang this as a duet with my father and it involved much vigorous bouncing in my crib. I had one of those body suits with the plastic feet, my ‘bunny bag’. Footwear is key to performance, as Beverly Sills famously remarked. I have never had cause to doubt her word in this matter.

My first public performance took place as part of the First Baptist Church Christmas pageant when I was just five years old. I sang ‘The Little Drummer Boy’. I had a drum and everything. Thus began a lifelong love of props. Put a prop in my hand and I am anyone’s. The eternal quest for stage business is helped mightily by a sword or flagon (or drum, in this case.)

Of course, by this time I was learning to play the piano under the tutelage of Mrs. Hartley, who told my parents that maybe lessons were not such a good idea as I hadn’t any perceptible aptitude for the instrument. This sentiment was echoed by subsequent piano teachers who nevertheless accepted my parents’ money and tried to instill some musical values.

I had a wonderful kindergarten teacher who made singing a joy. I still remember sitting backward on my little chair and waving my arm in a lassoing motion, all the while lustily belting out:

I don’t know why this particular memory persists but there it is. Kindergarten was a wonderful time. I also learned to take naps by laying my head on my desk and to wink, though I was only able to accomplish this last feat by chewing my peanut butter sandwich at the same time.

Clinton Ford Elementary School afforded many opportunities for musical expression. We had frequent assemblies, talent contests and shows. When I was ten years old we produced ‘Joseph and his Technicolor Dreamcoat’ and I got to play Joseph.

When I was eleven years old I joined the Calgary Boys’ Choir and I sang with them till my voice changed. It is from this time that I truly mark the beginning of my formation as a singer. Our conductor, Douglas Parnham, was a master musician who gave us all a sense of what it was that made a performance memorable. I remember vividly a practice at which each of us was required to stand up and explain the phrasing of a Cherubini canon. Any musicality or artistic sense I possess today had its beginning in Mr. Parnham’s insistence on musical excellence. He gave me a tremendous foundation and, thankfully, the Calgary Boys’ Choir continues its work in the community, training up the next generation of singers.

So now I am in high school (voice changed just in time, as it turns out) and I am involved in the school musicals. We had a wonderful choral teacher, Joan Bell, who was always short of men – for her choral program, I mean – and who produced a major musical every year to bring the young men out of the woodwork, hoping that they would subsequently join the choir. In Grade 10 we produced ‘The King and I’ and I played the Burmese lover, Lun Tha. The big song, ‘We Kiss in a Shadow’, only needed an octave’s range which conveniently was all I had at that tender age. In Grade 11 the show was ‘Bye, Bye, Birdie’ for which I was the rock idol Conrad Birdie (talk about suspension of disbelief – I had braces and a gold-lamé jumpsuit) and my final year of high school saw me as Tevye in ‘The Fiddler on the Roof’. It was that year that I finally succumbed to Mrs. Bell’s charms and joined the chorus. She did not exaggerate the extent of her men problems – I found myself one of four (count ‘em – four) men singing with forty women. We were never asked to sing softly.

Grade 12 was also when I started singing lessons with Ernest Atkinson. I loved musical theatre and wanted to be a better Curly, Tevye or what have you. I never knew what was waiting just around the bend.

After high school I spent the summer at the Banff Centre School of Fine Arts as part of their musical theatre program. I was the youngest person there and I learned a LOT! One valuable lesson was that the material out of which they make dance tights has a peculiar property – when stretched it becomes completely transparent. I only discovered this by chance when the laughter of the dancers crowded into the space behind me became too distracting to ignore. Apparently, my huggy bear briefs (with ‘I love you’ written in French and English) were fully visible and creating quite a stir. My next valuable lesson was about the discomfort of dance belts.

A couple of years later I was asked to join the chorus of the Calgary Opera. Actually, I was hoodwinked into joining the chorus. One of my instructors at the Banff Centre had been James Beer, also chorus master. He had had some mild health problems and so had asked my singing teacher’s wife, Sandra Atkinson, to recruit the singers for the fall season. My name was on the list. Sandy made it seem like Jim’s dying wish was that I sing in the chorus. What could I say? Even though my exposure to opera had been limited to Bugs Bunny cartoons and the Turandot production in which my teacher had appeared, an opera famous for insomnia and an unpronounceable title, I felt that it would be callous in the extreme to ignore Jim’s final plea.

Well, September of 1983 saw me standing (in tights, interestingly enough) on the stage of the Southern Alberta Jubilee Auditorium, singing in the chorus of ‘Les Contes d’Hoffmann.' After Jim’s miraculous recovery (hmmmmm...) he coached us through the whole experience, wild French lyrics and all. Being a keen youngster, I had a friend help me make up some phrases to add artistic verisimilitude to our otherwise bald and unconvincing onstage ‘rhubarb’ acting. I can still say, ‘The floor needs waxing’, ‘Have you ever seen such an ugly dog’ and ‘Your mother eats army boots.' Great for the production but useless if you are in a bar on the Left Bank and just looking for a café au lait.

After that show I was completely hooked on opera. We did three productions a year and I would gladly have done twenty. The opera company began to give me small roles and so I got a lot of experience during the five years I sang with the chorus.

When I had finished my university studies (I earned a Bachelor of Education degree, intending to be a high school maths teacher) I decided that I had better pursue this singing thing and see how far I could go. I mean, I knew very well that only a privileged few ever had the chance to actually sing for a living. My father was initially very nervous for me, since he had spent his career as a consultant geologist waiting for the phone to ring with his next job and hoping that there would be enough work to fill up his year. He understood very well the obstacles in my path.

My first major stroke of luck was being asked to join the Atelier Lyrique de l’Opéra de Montréal, a one-year training program for young singers. It was quite a shock to my system: my first apartment (a basement flat with spiders the size of cats and flamenco-dancing neighbours above), a new city, a new language and a completely new way to work at my craft. Instead of squeezing in lessons, coachings and practice between lectures on abstract mathematics and child psychology, I was free to spend my whole day as a singer. Inevitably, this led to lots of billiards. There was a wonderful pool hall with discount afternoon rates located just across the street from the studios where we worked. As long as we left discreetly we were often able to sneak over for a game or two (or eight.)

Our in-house show that year was ‘La Bohème’. Vocally unsuited as we all generally were for our roles, we could not have been more like these characters. We were all best friends. We regularly went out to all-you-can-eat buffets or the Polish restaurant on Prince Arthur for their weekly special. Our warm-up exercises before shows usually involved a raucous game of cribbage. One time we needed a table to play on so I just grabbed the first stool I could find. When places was called we were in the middle of a particularly close game so we agreed to just put down our cards and continue at the half. It wasn’t until Schaunard showed up with the food and the story of the parrot that I realized that my stool was still in the dressing room. Some inventive restaging followed.

After a couple of years at the Atelier I was given the position of Artiste en Residence which sounds really impressive but basically means that if there is a small role for you to do you do it. I sang every comprimario role in the repertoire, it seems, as well as a few choice nuggets in smaller productions. I learned so much and was able to compile a considerable resume, all the while making my living as a singer. Who could ask for more?

During these two years as Artiste en Residence I met my good friend Alison Pybus and we have been a creative team ever since. And the rest, as we say in my adopted city, is histoire!