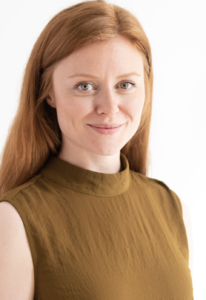 Holly Cinnamon is an actor, singer-songwriter, Alexander Technique and yoga teacher based in both New York City / Lenapehoking and Toronto / Tkaronto, Canada. She has been teaching yoga since 2013, after completing her YogaWorks teacher training with Catherine Munro and Rene Johnson and her Yin Yoga teaching certificate with Joe Barnett. She has taught yoga at various studios and organizations across the U.S. and Canada, including: Shanti Yoga (Edmonton), Modo Yoga (Charlottetown), Infrared Yoga & Fitness (Charlottetown), the Boston Conservatory at Berklee, Opera Nuova (Toronto & Edmonton) and Teaching Presence (NYC).

She trained and certified in Alexander Technique at the Boston Conservatory at Berklee under Debi Adams, where she completed her MFA in Musical Theatre. Holly has also studied with Tommy Thompson at the Alexander Technique Centre at Cambridge and she completed one year of the Actor’s Secret Trauma Training for AT teachers with Betsy Polatin. Holly taught AT as Belinda Mello's assistant at the Barrow Group Theatre School and with Tommy Thompson in the American Repertory Theatre’s MFA Program. For the past four years, she has been on the faculty of the Opera Nuova Summer Training Program, which is renowned for its developmental impact on early-career opera singers across Canada. She has offered workshops at Alexander Technique International conferences in Ireland, Japan and online. She has published two articles on Alexander Technique, screen fatigue and trauma in the digital age in the ExChange, ATI’s professional journal. Holly owns and operates her small business, Teaching Presence: Embodiment and Empowerment Education, based in Hell’s Kitchen. She works with Broadway actors, professional musicians, painters and beyond, to improve efficiency and ease in performances and the workplace. www.teachingpresence.com

In addition to teaching, Holly is a professional actor, singer and songwriter. Notable acting credits include playing Julie Barnes throughout Season 3 of Marvel's Daredevil, now streaming on Disney+, and appearing Off-Broadway in Dear Jane at the Clurman Theatre. She was featured in the film The Girl Who Cannot Speak, which was honoured as a "Coup de Coeur" selection at the 2018 Cannes Festival. Explore her artistic work at: www.hollycinnamon.com