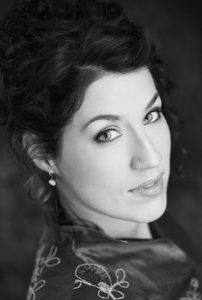 2018 marks the 41st year that Dr. Kinza Tyrrell has been playing the piano.  She made her  orchestral debut with the Victoria Symphony at age twelve.  The critics have called her a “sensation” with “award-winning talent”, pronouncing her playing as “brilliant” with “beautifully limpid tone colours and sparkling passagework” and “skilled artistry.”  Kinza pursued her love of music at such institutions as the prestigious Mozarteum in Salzburg, the Musikhochschule für darstellende und Kunst in Graz, the Banff Centre for Fine Arts, The COC Opera Ensemble Studio, the Tanglewood Music Festival and the Merola Opera Program in San Francisco.  She received her Doctorate of Music in Piano and Vocal Accompanying Performance from McGill University in 2003 under the tutelage of Michael McMahon.

Dr. Tyrrell is one of Canada’s finest collaborators and has been heard on the recital stages across the country, having concertized with many renowned singers including Richard Margison, Erin Wall, Benjamin Butterfield, Daniel Taylor and Measha Brueggergosman.  Increasingly recognized for her teaching and vocal coaching, Ms. Tyrrell has been invited to different universities and Young Artists Programs for masterclasses, workshops and diction classes. She has also been asked to accompany masterclasses of Craig Rutenberg, Warren Jones, Martin Katz, Rudolf Jansen, Gerald Finley, Russell Braun and Jane Eaglen.  In her spare time, Kinza continues to seek out dramatic solo piano music performing opportunities which inform her orchestral playing and Répétiteur work.

Over the past twelve years, Kinza has also tried her hand at conducting.  She is currently in her eleventh season as Principle Répétiteur, Assistant Conductor and Assistant Chorus Master with Vancouver Opera, Music Director of Vancouver Opera in Schools and is the Head Coach for VOA’s Yulanda M. Faris Young Artists Program. As well as having been on faculty at the renowned Canadian Opera Company in Toronto since 2004, Ms. Tyrrell has held conducting and teaching positions at the University of Victoria, Vancouver Summer Opera Studio, Vancouver Concert Opera Cooperative, Banff Center’s Opera As Theatre Program, the Center for Opera Studies (COSI) in Sulmona Italy, Opera Kelowna, the Vancouver International Song Institute (VISI) and the Charlie Creek Vocal Workshop in Wabash, Indiana.