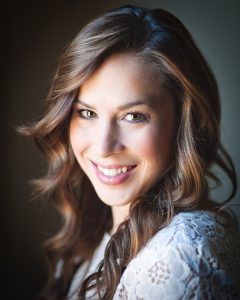 Currently based in Toronto Ontario, soprano Lida Szkwarek is quickly establishing herself as a prominent young artist on the Canadian opera scene. The 2018-19 season held a very exciting debut as Gretel in Humperdinck's Hansel und Gretel with Guelph Symphony Orchestra. Ms. Szkwarek is also thrilled to be returning to Edmonton Opera next season to sing Gretel once again in their brand new production of the opera.

In 2017 Ms. Szkwarek was praised "with vocal talent and technical skill of professional

calibre, she breathed life into this complicated role, the characterization, whether vocal or dramatic, believable and compelling. Her storm aria at the end of the first scene, and even more the extended solo passage at the end, were the stuff of operatic thrills." by the Calgary Herald in her portrayal of Filumena in the remounting of John Estacio's Filumena with Calgary Opera. Ms. Szkwarek also debuted with Niagara Symphony in their 2016-17 season as the soprano soloist in Mahler's Symphony No. 2 under the baton of Bradley Thachuk. Ms. Szkwarek's 2015-2016 season was met with great praise in her debuts with Edmonton Opera as Micaëla (Carmen) as well as a role debut as Erste Dame in Mozart's Die Zauberflöte with Calgary Opera.

A graduate of Calgary Opera’s Emerging Artist Program Ms. Szkwarek recently had the honour of competing as a semi-finalist with the Metropolitan Opera’s National Council Auditions in New York. Other recent performances include Pamina (Die Zauberflöte) and Micaëla (Carmen) with Saskatoon Opera, Susanna (Susanna's Secret) with Calgary Opera's Emerging Artist Program as well as her debut with The Greater Grand Forks Symphony Orchestra.

Ms. Szkwarek completed her studies at the University of Western Ontario under the

tutelage of Theodore Baerg where she achieved her Bachelor of Music Education as well as her Masters of Music Performance and Literature. During her time there she performed the roles of Countess Almaviva (Le Nozze di Figaro), and Donna Elvira (Don Giovanni) with UWOpera. Ms. Szkwarek has also had the opportunity to perform with some of Canada's leading Young Artist Programs. Past performances include Donna Anna (Don Giovanni) with the Banff Centre, Rusalka (Rusalka) with Opera Nuova and Suor Angelica (Suor Angelica) with Opera on the Avalon in St. John's Newfoundland.