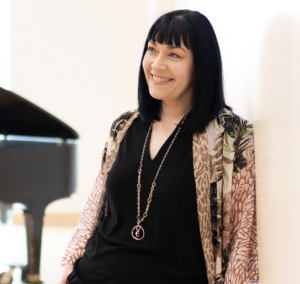 Mezzo-soprano Renée Brad teaches voice in the Theatre Arts Department at MacEwan University, maintains an active private studio, and is in demand as an adjudicator and clinician. This past year, she was a guest instructor in the voice department at the University of Alberta and in the summer of 2021 enjoyed teaching at the Opera Nuova Summer Intensive Program. Renée has performed in opera, oratorio, musical theatre, chamber music, and solo recitals throughout Canada and in New York. She appeared with Edmonton Opera, delighting audiences as Cousin Hebe in their Sterling Award winning production of HMS Pinafore. Also for Edmonton Opera, she sang Kate in Pirates of Penzance, Annina in La Traviata, Berta in Il Barbiere di Siviglia and the Dama/Hexe in Macbeth.  She appeared as The Mother in Menotti’s Amahl and the Night Visitors and The Witch in Hansel and Gretel with Opera Nuova. Roles for Opera Saskatchewan include Tisbe in La Cenerentola, Kate Pinkerton in Madama Butterfly, and Berta in Il Barbiere di Siviglia. She sang Mercedes in Carmen with Saskatoon Opera, Popova in Walton’s The Bear, and Kate in Elizabeth Raum’s The Dream of Nicholas Flood Davin with the Regina Centenary Project. Favorite theatre roles include Rose in The Secret Garden, Meg Page in The Merry Wives of Windsor, Katisha in The Mikado, Amy in Company, and Ella in Bells are Ringing. A frequent soloist with orchestras, Renée has performed Karl Jenkin's Stabat Mater, Haydn’s Lord Nelson Mass and Paukenmesse, Schubert’s Mass in E-flat, Bruckner’s Te Deum, Mozart’s Coronation Mass and Requiem, Bach’s Weihnachts Oratorium and Johannes Passion, Vivaldi’s Magnificat and Gloria, Handel’s Messiah, and Beethoven’s Ninth Symphony. Renée's recording of Elizabeth Raum's How Bodies Leave Ecstatic Marks with the Contrasts Trio for the CMC Centrediscs label won a 2008 Western Canadian Music Award. Renée created and premiered the cabaret Motherhood: The Second Oldest Profession for the Golden Apple Theatre Company, and recent performances include the cabaret Songs in the Key of Life and Mezzo Madness at the University of Alberta.