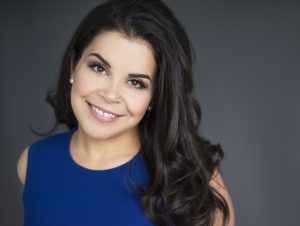 Canadian soprano Simone Osborne has been hailed as "a joy to hear" (Los Angeles Times) with "a sweet and clear sound, sensitive phrasing and gleaming sustained high notes" (New York Times). Ms. Osborne was one of the youngest ever winners in the history of the Metropolitan Opera National Council Auditions and has gone on to debut on opera and concert stages all over the world. She began her career as a young artist in the Ensemble Studio of the Canadian Opera Company and has debuted over a dozen leading roles with the company in recent years.

Canadian highlights this season include, a return to the Canadian Opera Company for her role debut as Adina in L’elisir d’amore, Pamina in Die Zauberflöte in a new production by Robert Lepage with the Festival d'opéra de Québec, a set of solo recitals in her hometown of Vancouver for Music in the Morning series, and a duo recital with Canadian bass-baritone Gordon Bintner and Canadian pianist Michael McMahon for the Ottawa Chamber Festival. She recently appeared in a special project for the 2016-2017 season: the 50th Anniversary new production of Harry Somers’ Louis Riel as Marguerite Riel, helping to mark the 150th anniversary of Canada’s confederation, with initial performances at the Canadian Opera Company. This production also traveled to the National Arts Centre in Ottawa and Opéra de Québec for further performances. Ms. Osborne was also seen as Pamina in Die Zauberflöte at Pacific Opera Victoria.

She began the 2015-2016 season with a return to the role of Gilda from Verdi's Rigoletto with Vancouver Opera. She also returned to the Canadian Opera Company for her first performances as Micaela in Bizet's Carmen with an all-star cast. On the concert stage, Ms. Osborne crossed the United States in a 15 city tour in 2016 with the Metropolitan Opera Rising Stars series. She returned to the Toronto Symphony Orchestra for performances of both Mahler's 4th Symphony and a selection of soprano opera arias and debuted Berlioz' Les nuits d'été with Berkeley Symphony. She also joined the Vancouver Symphony and Bach Choirs for Handel's Messiah.

In the 2014 – 2015 season, Ms. Osborne was seen as Nannetta in Robert Carsen’s production of Falstaff at the Canadian Opera Company and made her role debut as the title role in Lucia di Lammermoor at Edmonton Opera. On the concert stage, she reprised the role of Marguerite in Honegger’s Jeanne d’Arc au bûcher with Orchestre Philharmonique de Monte-Carlo, Orchestre National du Capitole de Toulouse, and Orchestre de Paris, all under Kazuki Yamada. She also debuted with the New York Philharmonic in the same piece under Alan Gilbert.

Ms. Osborne returned to the Canadian Opera Company as Oscar in Un ballo in maschera and as Musetta in La bohème in the 2013 – 2014 season. She debuted with the Vancouver Symphony singing orchestral songs of Richard Strauss and as soprano soloist in Beethoven’s Symphony No. 9. Recently, Simone Osborne debuted at Opera Hamilton as Gilda in Rigoletto and returned to Vancouver Opera as Pamina in Die Zauberflöte. Ms. Osborne also debuts with the Los Angeles Philharmonic under Gustavo Dudamel as Barbarina in Christopher Alden’s production of Le nozze di Figaro and at Carnegie Hall with pianist Warren Jones as a part of the Marilyn Horne Song Celebration. She also took part in a special project with Lotfi Mansouri entitled Viva Verdi! in Zurich to celebrate the composer’s bicentennial. The summer of 2012 saw her debut at the Saito Kinen Festival in Honegger’s Jeanne d’Arc au bûcher as Marguerite under the guidance of Seiji Ozawa.

Ms. Osborne made her role debut as Gilda in Christopher Alden’s production of Rigoletto and returned for Lauretta in Gianni Schicchi conducted by Sir Andrew Davis, both at the Canadian Opera Company in the 2011 – 2012 season. She also made her Vancouver Opera debut as Juliette in Roméo et Juliette to great critical acclaim. In concert, she made her Toronto Symphony debut in Mozart’s Requiem under music director Peter Oundjian, was soprano soloist in the Victoria Symphony’s New Year’s Day Viennese Gala, and toured Canada in recital presented by Debut Atlantic Recital Series.

Ms. Osborne sang Pamina in Die Zauberflöte for her first major assignment with the COC. This production was conducted by music director Johannes Debus and directed by Tony Award-winning director Diane Paulus. She was also seen in productions of Death in Venice, Ariadne auf Naxos, and Orfeo ed Euridice. As first year member of the COC Ensemble, Ms. Osborne performed the role of Ilia in the ensemble performance of Idomeneo under the baton of Harry Bicket. She was also seen as Frasquita in Carmen, Anne Kennedy in Maria Stuarda, and Rosina in Il barbiere di Siviglia on tour, as well as a performance of the Pribaoutki songs in the premiere of Robert Lepage's The Nightingale and Other Short Fables.

An active recitalist, Ms. Osborne was heard in recital as a part of the Marilyn Horne Foundation's "On Wings of Song" recital series, as well as a solo recital for the Hong Kong Arts Festival in the spring of 2010. She also joined the Edmonton Symphony for performances of Bach's Jauchzet Gott in allen Landen and Mozart's Exsultate, jubilate.
Previous operatic roles include Susanna (Le nozze di Figaro), Nannetta (Falstaff), Gretel (Hänsel und Gretel), Musetta (La bohème), Atalanta (Serse), Mignon (Mignon), Marenka (The Bartered Bride), Candace Brenner (A Wedding), Laetitia (The Old Maid and the Thief), Papagena (Die Zauberflöte) and Emma Jung in the world premiere of the Canadian opera The Dream Healer.

"It’s hard to explain. But something of a miracle occurred on the stage of Roy Thomson Hall Thursday

Symphony…on Thursday, Osborne didn’t just sing that song, it’s as though she became the song, that hers

was the voice that had created the entire symphony. It felt as though the 80-odd musicians on stage were

somehow emanations of her and her musical presence, so thoroughly did she inhabit the music she was

singing. Even though Osborne is on stage for a mere fraction of the symphony’s duration, it was as though

she had been there the entire evening, as though we had been hearing her somehow make the symphony’s

music." - The Globe and Mail

performance. Osborne has a rich, youthful voice and a keen sense of drama, especially in the almost

operatic lament “On the Lagoons.” What is more, her French diction is impeccable — she would do well to

incorporate more French roles into her repertoire as her burgeoning career unfurls." - The San Francisco

“A selection of songs by Verdi and Rossini made the most of Simone Osborne’s keen dramatic instinct. Her

“Simone Osborne, with her clear, supple soprano, went directly to the heart of her American songs. This

fine singer deserves to have an entire Ravinia song program all to herself.” - Chicago Tribune

“Osborne’s Mad Scene was the tour-de-force it needs to be, beautifully sung, convincingly and quite

passionately acted, a woman who still has the touch of the girl as she loses her reason.” - Edmonton

"Most convincing of all was Simone Osborne’s Gilda, much to the delight of her hometown audience. Gilda

is ideal for Osborne’s soprano at this point, with her appealingly girlish timbre, easy coloratura, and ringing

high E flat. More importantly, her lyric coloratura has grown in richness and depth and was able to

second act duet with Rigoletto, devastating in its intensity and running the full vocal gamut from a rich

“...Simone Osborne, as Adina. This lyric soprano has this bel canto thing down to tee, with a vocal delivery

that’s stylish yet natural. A little trill, a touch of portamento, a slightly sustained high note, and a florid

passage are the tools of her trade – and she uses them with discretion to excellent effect. I could listen to her

(actually a mourning song of the Nisga’a people of British Columbia, the musical highlight of the

evening)." - The Globe and Mail

"Osborne proves that she is a wonderfully well-rounded performer - her portrayal is never stiff, as she

bounces around the stage with youthful energy. From overture to bows, Osborne carries the audience in the

palm of her hand." - Broadway World

“Simone Osborne had a field day as the willful Musetta, and her substantial, pointed singing was far more

than the yipping dog of a caricature that one sometimes encounters. Her famous aria was dispatched with

sassy intent to be sure, but it also had a sensual, languorous quality that we found (like Marcello)

coupled to a dewy, girlish sweetness. Her wailing and keening had an unforced despair, like the final song

“The best single reason for this particular revival is as a showcase for Canadian soprano Simone Osborne,

making her Vancouver Opera Debut in the role of Juliette.” - The Vancouver Sun

"Simone Osborne, as the lovelorn daughter of the title character, performs the first part of her "Caro Nome"

aria lying splayed on the floor because she's so overcome with her crush. Not that you'd notice from the way

she sails through the notes with the joy of a bird at sunrise. Rather than play her fragile and naive to the

Duke's smooth-talking, Osborne brings strength and youthful passion to her Gilda. It’s fun to watch the

young soprano let loose with the vocal pyrotechnics, reaching the heights out of real emotion, and finding

rich shades in the lower register." - The Georgia Straight

"COC darling and favourite Simone Osborne sang the role of Micaëla beautifully. Her bright tone, and

sparkle was delicious on this role. Her "Je dis" was breathtaking. Alone onstage, in a ruined temple, under a

blanket of stars she brought Micaëla's longing to life." - Schmopera

"Simone Osborne has emerged as a first-rate coloratura soprano. She gave us a sweetly engaging leading

Matthew Epstein....Visibly moved, Horne proclaimed the recital one of the greatest she had ever heard, and

praised the singers as among her favorites in a long and distinguished career as a mentor of young talent."

"Osborne’s return to the stage for the fourth movement was the highlight of the evening. Her approach to

the child-like text was ingenuous and heartfelt, and her performance was clear, polished and secure. Under

Sanderling, the orchestra’s intense outbursts were an effective contrast to Osborne’s lyricism." – Eatock

provocative, childlike and sung with every note a jewel. Osborne can soar over chorus and orchestra when

"Simone Osborne as Barbarina was an eye-opener. She sang with a dynamically rich sound that had plenty
of body. Dramatically, she is to be commended for all that she was asked to do in the production. If the
production’s concept was successful at all, it is to be owed to her." - Bach Track