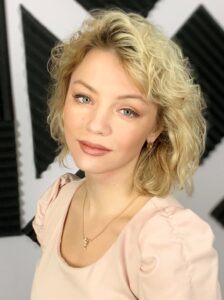 Foreign Woman & Voice on the Record: "The Consul"

I am very excited to get to work with a wonderful team again! I am getting familiar with the material (the opera and my role); I am trying to keep my voice in the best shape possible as well as the whole body and mind to have much energy for the program!

I was so glad to participate last summer in NUOVA hybrid program! I got much of wonderful professional advices of all kinds and found myself able to apply them successfully to my performing practices. I am so excited about getting to grow more and develop my professional skills as well as meet new artists and work together!

Anastasia Pogorelova, coloratura soprano, was born in Moscow where she studied at the College of Musical and Theatrical Arts. In 2015 She obtained her Master’s degree in Opera and Chamber Music as well as Teaching from the Gnessin Russian Academy of Music in Moscow under the supervision of professor Valentina Levko. As a student, she regularly sang in Vishnevskaya Children’s Theatre performing in Italy, Spain, Bulgaria and throughout Russia. In 2012 she won the 2nd place in the Kabalevskiy International Competition in Moscow. She has appeared in concerts in Florence, Italy (2013), Ischia, Italy (2013, 2014, 2015, 2016), and Salzburg, Austria (2014). During this period, she was an active participant in master classes with Ines Salazar, Janet Perry, Mikhail Hallak, Mary Pinto, David Bowser and Michael Paul. While studying in the Academy Anastasia performed in Mozart's "La nozze di Figaro” as Susanna and Barbarina. She sang several times at the Opera Night Project in Moscow under the direction of Haik Grigoryan (2013-2015). After graduating, Anastasia continued her vocal training with Maestro Michael Paul in New York. In 2016 she moved to Toronto and performs with the Belle Voci Ensemble as well as a recital artist. Anastasia performed as a soloist in classical music concerts including one organized be Maestro Kerry Stratton with Polish saxophone virtuoso Ryszard Zoledziewski and pianist Anna Shalaykevych, Toronto, 2016, a Christmas concert with the Greater Toronto Philarmonic Orchestra conducted by Maestro P. Busato, Toronto, 2017, a Symphony in the gardens concert at Casa Loma, Toronto, 2018, a Christmas Concert with Toronto Concert Orchestra, Richmond Hill, 2018. In 2019 she performed at Halifax Summer Opera Festival as the Queen of the Night in Mozart’s “Die Zauberflöte”. After that she participated in Stratford Music Vocal Academy with guidance of  Phillip Addis and Emily Hamper where she performed in series of concerts and experienced master classes with such artists as Russel Braun, Erin Wall, Roger Honeywell, Jean-Marie Zeitouni and Howard Dyck. In 2020 she has been accepted to Opera NUOVA Emerging Artist Program with credits of Ruth Putnam in R. Ward’s “The Crucible”,1st Witch in H. Purcell’s “Dido and Aeneas” and Mercury in J.Rolfe’s “Aeneas and Dido” She has been accepted to Halifax Summer Festival 2020 with the role of Belinda in H. Purcell’s “Dido and Aeneas”. In 2021 Anastasia participated in NUOVA Hybrid training Program as well as the final concert. Anastasia’s repertoire consists of songs and arias of different genres and eras. She performs Baroque vocal music (Handel, Bach, Pergolesi), German, Italian, French arias and romances (Shubert, Strauss, Donizetti, Bellini, Arditi, Debussy, Poulenc) and Russian songs and Arias (Rimskiy-Korsakov, Varlamov and others). She enjoys singing Mozart, finding his music genial and very helpful for singers. Anastasia is a native Russian speaker and is fluent in English, Spanish and Italian.