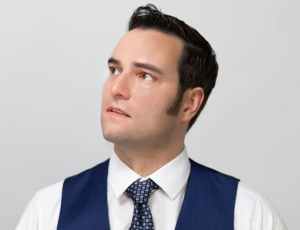 Martin is an Opera NUOVA Alumni, having participating in the Assistant Director program in 2017, as well as directing the 2018 School Tour of Brothers Grimm

Praised for his significant contribution to the arts in Canada, Martin is the distinguished recipient of the Queen’s Diamond Jubilee Medal.

Martin Galba’s busy career in the arts as actor (film and stage), singer, director, choreographer, author, radio host and producer has been steadily building since his arrival in Canada in 2000.

Select roles in his repertoire include title roles in Jekyll & Hyde, Baker in Into the Woods, Frank N. Furter in The Rocky Horror Show, Edward Fairfax Rochester in Jane Eyre, the musical, Tateh in Ragtime, the musical, Princeton/Rod in Avenue Q, Frederick Barret in Titanic, the musical, Billy Flynn in Chicago, Emcee in Cabaret and the title role in Sweeney Todd, the Demon Barber of Fleet Street.

In the classical realm, he is a long-standing member of Edmonton Opera having performed with them since 2003 as chorus member in addition to The Customs Official and The Customs Officer in La Boheme and 2nd Knight in The Misadventures of Count Ory and numerous roles in Candide; with other local companies he sang the roles of King Kaspar and King Melchior in Amahl and the Night Visitors, Nanki-Poo and Ko-Ko in The Mikado and Morales/Zuniga (cover Escamillo) in Carmen.

He is also the author of Zonks and the Gate Keepers, a three part young adult fantasy novel series.