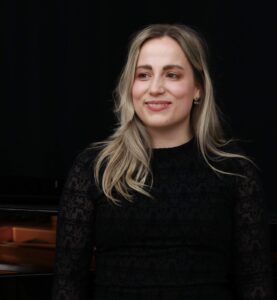 To prepare for Nuova, I am learning my repertoire well beforehand and practicing my lines with friends that are also in the program. I also write out pieces and rehearse them before bed to really get them ingrained.

What a time to be a performer. Who could have known that in 2020, the art form that we as singers have devoted our lives to, and one of the most basic ways we as humans have connected with each other for centuries would become the most dangerous. And yet through all the loss and sorrow and missed opportunities, we have recalibrated. We have used this time of solitude to look into ourselves and rethink how we perform and why we do what we do. To reinvent ourselves. To adapt. Through the power of technology, we have learned to connect and share in new ways that previously we might never have thought possible. I was supposed to partake in your ten-day program during the summer of 2020 and unfortunately was unable to due to the pandemic. Now being in the first year of my Master’s in Music Performance at the University of Western Ontario and having had the chance to reflect and further hone my technique, I now know more than ever that the path I want to continue on is that of pedagogy and performance. While also possessing a degree in International Development and Globalization and with a large background working and volunteering in the not-for-profit sector, it is my goal to be able to merge my two passions in a way that includes community involvement and fosters a sense of support and working together within the arts. Studying with Opera Nuovo will help me improve my craft while working together within a community of other artists who are there to learn and perform. As such, I hope to be able to have the opportunity to finally partake in one of your accredited summer programs.

Born and raised in Ottawa, Soprano vocalist and musician Olivia Charlebois-Brandvold, is currently in her first year of her master’s in music and performance at Western University, under the tutelage of coloratura soprano Jackalyn Short. Prior to this, Olivia lived and studied in Montreal, where she completed her BFA with distinction, in music Performance at Concordia University. As early on as she can remember Olivia loved to sing, taking lessons in voice, as well as guitar and flute, and performing at every possible opportunity from talent shows, to coffee houses, school choirs, and later on performing in various bands and solo projects in Ottawa, Montreal and surrounding areas. In her own songwriting, Olivia has been heavily influenced by female songwriters such as Dolly Parton, Joni Mitchell, Buffy Sainte-Marie, Stevie Nicks, and hopes her music reflects as such.

As an experienced recording artist, and versatile vocalist in a variety of styles including Folk, Jazz, Musical Theatre, Pop, and a strong classical background, she has sung vocals on various projects including Tim Charman’s Take Note There’s Still a Hole In Your Heart EP, and Craig Horan’s Final Capstone Project. Olivia has had the opportunity to work with such respected faculty as Amanda Brunk, Marie Baron and M.J. Johnson, studying cross-over technique at Wilfred Laurier University. She has also participated in jazz workshops taught by Lisa Martinelli and Shanon Gunn at Humber College in Toronto. During the summer of 2019 Olivia performed the role of “First Spirit” with the Halifax Opera festival in their production of Mozart’s Die Zauberflöte.

With an extensive background working and volunteering in the not-for-profit sector, coupled with a Bachelor’s degree in International Development and Globalization, Olivia also seeks to merge her passions for music and community outreach to develop innovative projects that encourage peer support, creative cooperation and social networking within the arts community. For three years, while at Concordia, Olivia co-ran a music improv club called Collbra-dabra-tory, based on the teachings of Music for People an organization started by Grammy award-winning cellist David Darling. The club’s mandate was to bring students from all faculties, as well as community members together who shared a passion for music and creation.

It is Olivia’s ambition to continue to pursue her love for performance, to teach and one day have her own voice studio all while continuing to expose others to the opportunity to create, learn and benefit from all that music has to offer.